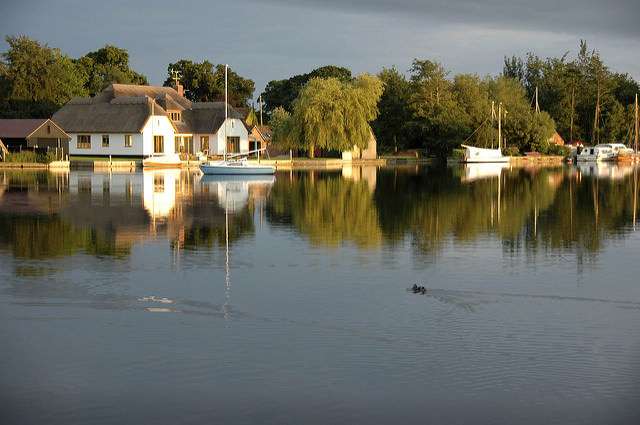 The Norfolk Broads are a popular holiday destination and attract many visitors throughout the year. There are a range of different activities to do on the waters and in the surrounding areas, but there’s more to this beautiful area than meets the eye. Impress your family and friends next time you visit with these five things you probably didn’t know about the Norfolk Broads.

1.The Broads are man-made

Though they may look as if they occurred naturally, the Norfolk Broads are actually man made. The Broads were an accidental result of flooding caused by peat digging. From the 12th Century, people dug for peat as an alternative fuel supply to timber, and this continued until the 14th Century when sea levels rose and flooded the pits. The Broads were then extended in 1640, where three locks were installed at Geldeston, Ellingham and Wainford, which were open for public use to navigate the waters until 1934.

2.The Broads have inspired great works of art

The Broads have inspired a number of different artists, from authors to musicians. The Norfolk Broads were mentioned in David Bowie’s Life on Mars, ‘From Ibiza to the Norfolk Broads’, but were also the inspiration for Arthur Ransome’s famous ‘Swallows and Amazons’ series of children’s books.

3.The only monastery that Henry VIII did not close is here

Unlike all other monasteries in England, St Benet’s Abbey on the River Bure survived King Henry VIII’s Dissolution of the Monasteries. You can still visit the remains of Abbey today by boat by mooring on the Broads Authority’s free moorings. In fact, there is still a Sunday service on the first Sunday in August, which is led by the Bishop of Norwich, who is also the Abbot of the Abbey.

4.The Broads are the country’s 3rd largest inland navigation area

With the length of the Broads’ navigable waterways totaling 125 miles, and the total area covering 117 square miles, the Norfolk Broads is the 3rd largest inland navigation area in the United Kingdom. It is also one of the most diverse, with nearly 2 miles of coastline and passing through a variety of villages, towns and even the city of Norwich.

Some of the country’s rarest wildlife species can be found on the Norfolk Broads. In fact, the Fen Raft Spider was considered extinct until it was spotted on the Broads in 1986. The Broads is also the only habitat in the country for the Swallowtail Butterfly, which feeds on the milk parsley that grows in abundance in the area. The Broads Authority carries out conservation work to help preserve the area as an important habitat for these rare wildlife species, ensuring that tourism does not affect these habitats.

The Norfolk Broads are open throughout the year for a variety of different activities, just make sure you remember these five facts to impress your friends and family the next time you visit.

We use cookies on our website to give you the most relevant experience by remembering your preferences and repeat visits. By clicking “Accept All”, you consent to the use of ALL the cookies. However, you may visit "Cookie Settings" to provide a controlled consent.
Cookie SettingsAccept All
Manage consent

This website uses cookies to improve your experience while you navigate through the website. Out of these, the cookies that are categorized as necessary are stored on your browser as they are essential for the working of basic functionalities of the website. We also use third-party cookies that help us analyze and understand how you use this website. These cookies will be stored in your browser only with your consent. You also have the option to opt-out of these cookies. But opting out of some of these cookies may affect your browsing experience.
Necessary Always Enabled
Necessary cookies are absolutely essential for the website to function properly. These cookies ensure basic functionalities and security features of the website, anonymously.
Functional
Functional cookies help to perform certain functionalities like sharing the content of the website on social media platforms, collect feedbacks, and other third-party features.
Performance
Performance cookies are used to understand and analyze the key performance indexes of the website which helps in delivering a better user experience for the visitors.
Analytics
Analytical cookies are used to understand how visitors interact with the website. These cookies help provide information on metrics the number of visitors, bounce rate, traffic source, etc.
Advertisement
Advertisement cookies are used to provide visitors with relevant ads and marketing campaigns. These cookies track visitors across websites and collect information to provide customized ads.
Others
Other uncategorized cookies are those that are being analyzed and have not been classified into a category as yet.
SAVE & ACCEPT
Powered by