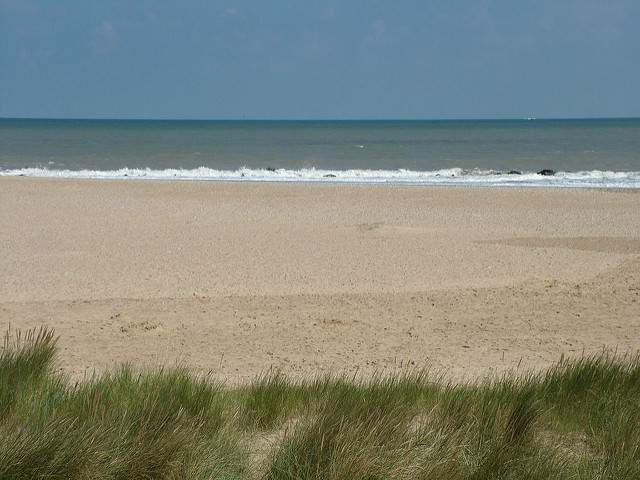 Today Caister-On-Sea is a quiet seaside town, a home for many, and a pleasant holiday retreat for others. Yet the Roman ruins which lie at the edge of town remind us that things weren’t always this way. The Roman ruins of Caister are a visible reminder that this small, English seaside town, was once at the forefront of the struggle for survival between the Roman Empire and the marauding Saxon hordes.

Caister-On-Sea derives its name from these ancient military roots. The latin term ‘castra’ means fortress, which, in the mouths of our ancestors, who brought with them their own languages and dialects, morphed over the years into ‘Caister’.

The Roman Fort which gives the town its name was built in the third century AD, probably between the years 225 and 285. It was part of a wider network of defences referred to as Saxon Shore forts. These were built across the south east of England, and were designed to protect against the Saxon raids which increased in intensity around this time. Caister locals and visitors to the inland fort will be surprised to learn that it was originally situated on an island in the confluence of the rivers Waveney, Yare, Ant, and Bure. Over many hundreds of years the estuary silted up, leaving the former ‘shore fort’ stranded firmly inland.

The original fort was about 3.5 hectares in size and square in shape. This makes Caister a significant, and larger than average, Roman fort. In its heyday it played host to a large garrison of sailors, infantry and cavalry, consisting of between 500-1000 men. There were at least seven rooms on the site, with a courtyard, and underfloor heating system. The fragments found in later excavations suggest that the interior would have decorated.

The function of the site appears to have changed over time. In the third and fourth centuries, domestic and industrial activities were carried out here. During this period a fire ravaged the site. A domestic accident, or a devastating raid from the invaders the fort had been designed to protect against?

With the collapse of the Roman Empire in the fifth century, the fort was abandoned. For over a hundred years the site remained in disuse, before being reoccupied, ironically, by the Saxons who had now settled in Eastern England. Subsequent excavations suggest that the Saxon occupants may have come from the elite, possibly monastic, section of Saxon society.

It is not known at which point the fort was abandoned entirely. More than likely, it gradually failed to serve any purpose for the Saxon and later Norman community of Caister. In such cases, locals would probably have stripped the fort of anything valuable, including the physical structure itself which could be repurposed elsewhere (such was the fate of the Coliseum, and many other Roman buildings across the world, large and small).

We do know that the one of the walls of the fort still stood above ground in the early 17th century, though it had been demolished entirely by the 18th. Thus the former fort remained until the archaeological excavation of 1951, which began to tease out the history of the site. Many important objects were uncovered, including a carved figure of the Roman God Mercury and bronze plaques. Elsewhere, rings, bracelets and hairpins were excavated, suggesting that women and children lived within the fort at some point.

Today, the ruins of the Roman fort of Caister are managed by English Heritage, and are open for free to the public all year round.

We use cookies on our website to give you the most relevant experience by remembering your preferences and repeat visits. By clicking “Accept All”, you consent to the use of ALL the cookies. However, you may visit "Cookie Settings" to provide a controlled consent.
Cookie SettingsAccept All
Manage consent

This website uses cookies to improve your experience while you navigate through the website. Out of these, the cookies that are categorized as necessary are stored on your browser as they are essential for the working of basic functionalities of the website. We also use third-party cookies that help us analyze and understand how you use this website. These cookies will be stored in your browser only with your consent. You also have the option to opt-out of these cookies. But opting out of some of these cookies may affect your browsing experience.
Necessary Always Enabled
Necessary cookies are absolutely essential for the website to function properly. These cookies ensure basic functionalities and security features of the website, anonymously.
Functional
Functional cookies help to perform certain functionalities like sharing the content of the website on social media platforms, collect feedbacks, and other third-party features.
Performance
Performance cookies are used to understand and analyze the key performance indexes of the website which helps in delivering a better user experience for the visitors.
Analytics
Analytical cookies are used to understand how visitors interact with the website. These cookies help provide information on metrics the number of visitors, bounce rate, traffic source, etc.
Advertisement
Advertisement cookies are used to provide visitors with relevant ads and marketing campaigns. These cookies track visitors across websites and collect information to provide customized ads.
Others
Other uncategorized cookies are those that are being analyzed and have not been classified into a category as yet.
SAVE & ACCEPT
Powered by