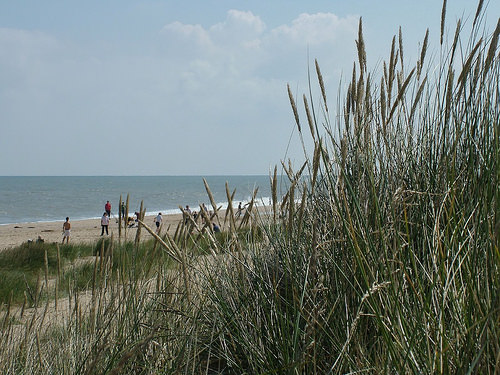 Visitors to Caister-on-Sea today would probably be surprised to learn of the ancient military history of this peaceful and tranquil seaside town. Whereas modern day Caister is known for sea, sand and (occasionally) sun, ancient Caister was synonymous with its military fortifications. Indeed, the name ‘Caister’ itself is actually derived from the latin term for fortress, ‘castra’. The fortress at Caister-on-Sea was built by the Romans in around the 3rd century AD to protect against the frequent incursions of Saxon raiders, and was one of a series of such fortifications erected in the south-east of England, known as the ‘Saxon Shore’.

A Time of Crisis

The era in which the fortress at Caister was built was a time of severe crisis for the Roman Empire. The halcyon days of the Caesars were long gone, and the empire had been weakened by internal strife, and increasing external threats in the form of ‘barbarians’ from Northern Europe.

Under these increasing pressures, the Romans undertook new measures to protect its sprawling borders, which ranged from Western Europe to the Middle East. In Britain, fortifications were built in the north in the form of the Hadrianic and Antonine Walls, while in the south-east, a series of sea-side forts were constructed to defend the Empire against the growing threat of seafaring barbarians.

The series of fortresses that became known as the Saxon Shore were heavily defended military installations, capable of housing thousands of Roman soldiers. The most distinctive feature of the Saxon Shore forts was their heavily fortified defences, comprised of massive stone walls and surrounded by ditches.

The term ‘Saxon Shore’ is derived from a contemporary Roman document, the Notitia Dignitatum, which lists nine sea forts under the command of an individual who bore the title of COMES LITORIS SAXONICI PER BRITANNIAM, which translates to ‘Officer of the Saxon Shore of Britain’. The existence of the Saxon Shore forts provides a fascinating insight into a turbulent period in British and world history, and helps us to understand the crucial role that the south-east of England played in the defence of the borders of the Roman Empire.

The Roman Fort in Caister

The Roman fort at Caister, which gives the town its name, and which is part of the wider network of ‘Saxon Shore’ defences, was built sometime between the years 225AD and 285AD. The fort was originally situated on an island in the confluence of the rivers Waveney, Yare, Ant, and Bure. Over hundreds of years the estuary gradually became silted up, leaving the Saxon Shore fort at Caister stranded firmly inland.

The fort played host to a garrison of perhaps as many as 1,000 Roman soldiers, members of both the infantry and navy, ready to defend the empire at a moment’s notice. The main threat to the soldiers stationed at Caister would have been the Germanic tribes who began to invade, plunder and destroy Roman held territory with increasing confidence as the power of the great empire faded. Eventually Rome became incapable of defending its borders, and abandoned its many imperial outposts, Britain among them, around the 5th century AD. The sea fort they left behind appears to have been abandoned completely, before being re-occupied, over 100 years later, by the Saxons, the descendants of the very tribes the fort had been built to repel. Gradually, the fort was abandoned altogether as it failed to serve any purpose for the Saxon, and later Norman community of Caister. The fort stood, in some form, until the 18th century, when it was demolished completely. Thus the Roman fort of Caister-on-Sea remained buried until the archaeological excavation of 1951, which unearthed the remains of the fort, and allowed us rediscover the ancient military history of Caister-on-Sea and the Saxon Shore.

For more information on the Roman fort at Caister and the history of the Saxon Shore please see: